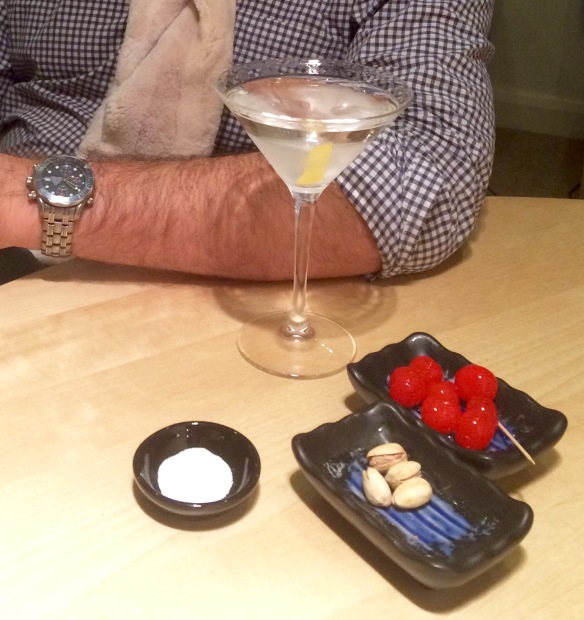 Normally I would only ever serve savoury snacks to accompany a martini, but there have been a small number of exceptions. I don’t have a sweet tooth but some of you might, so this is for you.

I made some umami tuna steaks for a friend for dinner (thank you Laura Santtini for the recipe). We had a martini as an apéritif before the meal but then wanted another one after we had eaten as well… I guess as a digestif.

After the umami flavour of dinner, my friend asked for something sweet to follow. I rarely eat dessert but I had one or two sweet items to hand – although they were perhaps a little unconventional, not just as a pudding, but also as a martini accompaniment.

And some cherry sherbet. Which looks a little bit like cocaine.

But let’s be honest, if you’re drinking martinis, who needs drugs? 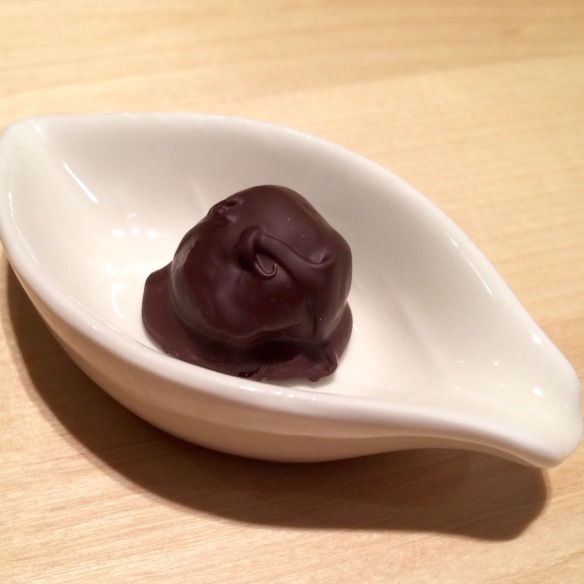 On another occasion I dipped some maraschino cherries in some Tobermory dark chocolate which went nicely as a digestif accompaniment. 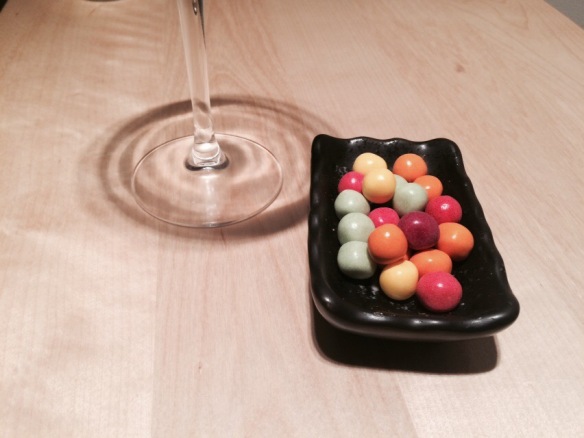 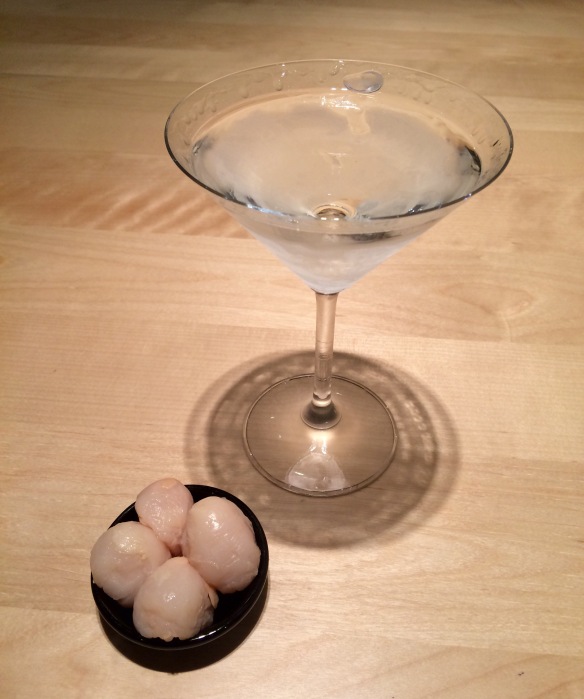 Lots of lychees can also work.

Especially if served as part of a lychee martini. 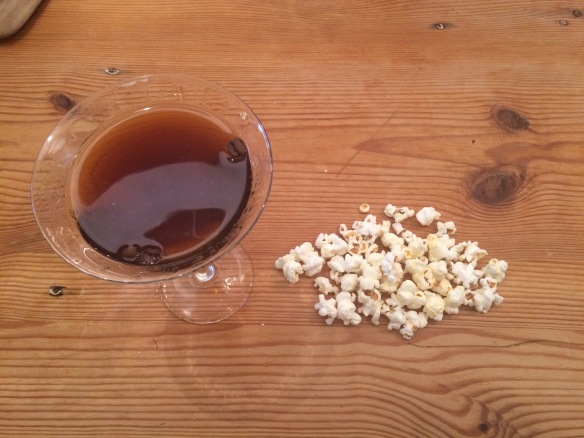 This sweet popcorn went quite nicely with an after-dinner espresso martini.

Here is a late-night martini I served with some chocolate-covered almonds.

Here is some homemade Scottish tablet, referred to by some of my friends in England as “sugar heroin”. It’s not particularly healthy but it tastes amazing and is a nice pick-me-up after a meal.

Even someone like me likes the odd bit of chocolate in the evening, especially during the winter months. Here is a small selection of rough pieces served on a cold, rainy night in Scotland.

Finally, how can you beat this Italian classic? The affogato (which means ‘drowned’) combines ice cream drenched in an espresso, in this case served perfectly in a martini glass.

Thank you Italy for taking us, once again, to the next level.

This is a slight departure from my normal work, but I’ve got a cold and was craving something less potent and more sweet and fruity than a martini. 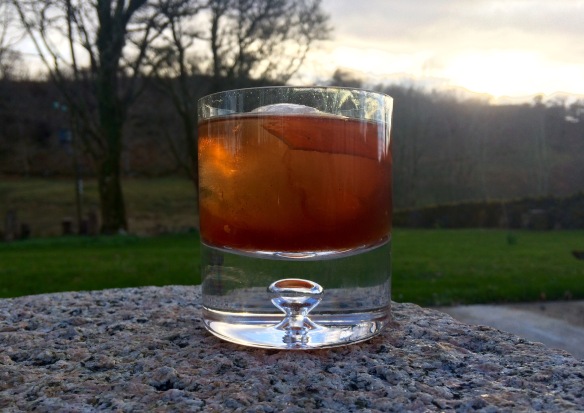 Apparently emerging in the early 1800s (it might even have evolved towards the late 1700s), this drink is a lot older than a Martini.

It also has a reputation for being a bit of a “fog-cutter” – that is, the sort of drink you choose when you’ve got a hangover, something sweet to try and ease the pain and help you get back on your feet again. The Breakfast Martini can serve a similar purpose.

Such hangover tactics are completely contrary to modern medical advice, but by Jove, if people have been swearing by the technique for over 200 years then who am I to argue?

Recipes for an Old Fashioned today can involve ingredients such as soda water, maraschino cherries and slices of orange but I wanted to create something much more intense, and err… old fashioned.

I like to taste alcohol when I drink alcohol, you see.

I first drank an Old Fashioned in the office after a long, intense day. I think we were in the midst of monitoring the onset of the Arab Spring, a time when Middle Eastern governments tended to collapse on a Friday, leaving us working late into the evening while the rest of London descended unto the pub. 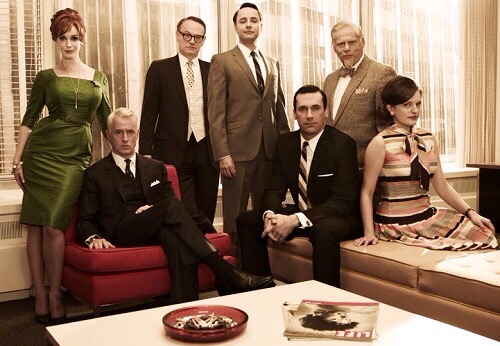 I was told the cocktail was making a comeback because of its portrayal in the US series ‘Mad Men’. My industry might not have encouraged the same sort of working hours drinking habits of Don Draper but booze was a fairly vital commodity once we had finished our work at the end of the day.

Given the supply of various ingredients we routinely kept in our drawers our office was the perfect place for our first tipple. A quick mix and we could relax, chat about work and enjoy a short period of shared workplace quietude before we too joined the masses in the pubs.

The recipe we used in the office involved honey, but my recipe uses demarara sugar.

I picked the garden with the whippet puppies but indoor settings are more common; somewhere with dim lighting, leather furniture and perhaps some cigars would definitely work.

Because of its sweetness I don’t think this drink goes especially well with nibbles.

It could, however, be served both before or after a meal.

Indeed the drink’s versatility means that it could be served at a variety of times in a range of environments and settings.

Here, for example, is a perfect setting: a bar cabaret performance by the talented Cat Loud and Finn Anderson. 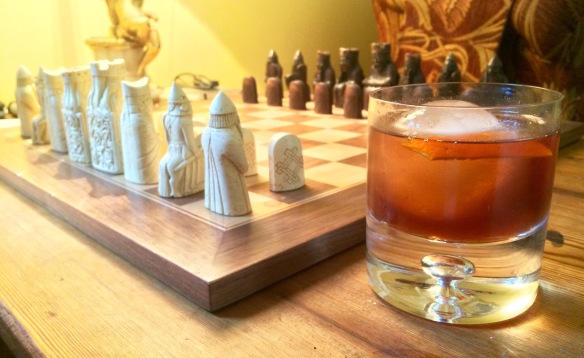 It also works well during more intense and strategic pursuits.

A sweeter alternative to the classic martini.

This one is very straightforward.

You will need gin/vodka, sweet vermouth and a jar of maraschino cherries. The following recipe is for a 150ml glass: Because of its sweet nature this martini could be served as a digestif instead of an aperitif.

I first tasted maraschino cherries at a very young age in the back of the Mishnish Hotel (above in yellow). A long-standing family-owned venue, a cousin sneaked me into the kitchen during some sort of gathering (a christening or wedding or something). I remember being confronted by a stern but caring member of staff who presented me with a cherry on a silver teaspoon to try before ushering me out and back to the family event. What a treat! I’ll never forget the taste.

Maraschino cherries were historically seen as a royal luxury in parts of Europe. A produce of Croatia, they have been picked, salted, pickled and sweetened in alcohol for centuries. What a luxurious addition to the classic martini.

Quite why it’s referred to as a Gypsy martini remains unknown to me. If anyone has any idea please comment below!

I also have to thank my latest martini guest CatLoud for some of these beautiful photographs. A former regular at the Mishnish, Ms. Loud is a cabaret singer (a perfect martini accompaniment) and a veteran of the Edinburgh festival. She will also be performing at the Canal Theatre Cafe in London in January. 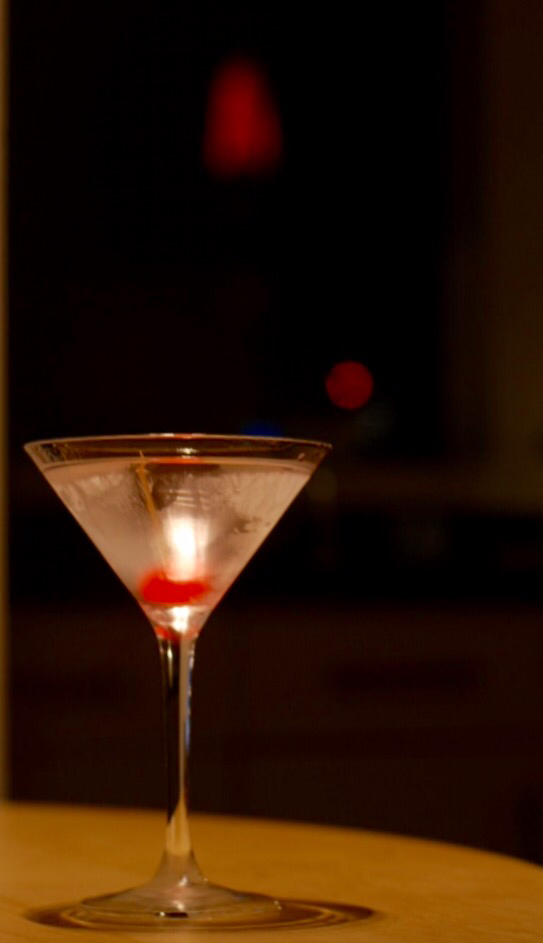 I love the sweet taste of maraschino cherries, so I thought I would incorporate it into a classic martini.

I made a classic martini and simply added two teaspoons of maraschino cherry syrup then garnished the drink with one of the cherries. 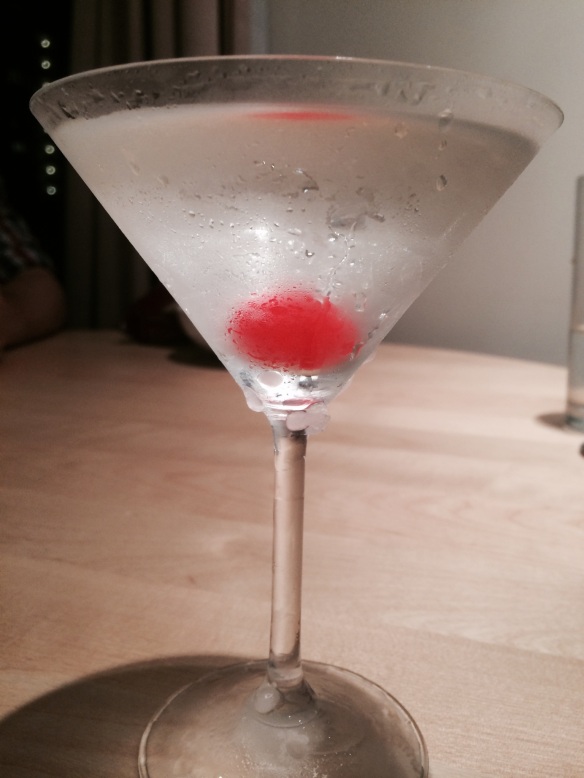 My cousin was visiting for a catch up so I decided to make her something sweet and dark. I saw fresh cherries for sale, incidentally from the same shire that she comes from, so I bought them and went from there. So here is the result, the dark cherry martini.

3 parts gin or vodka
1-2 parts sweet vermouth (to taste)
2 parts cherry syrup (taken from a tin of dark cherries)
Dash of cane sugar dark cherry fizzy drink (totally optional, I only bought it out of interest)
Some cherries from the tin to garnish

I also served it with fresh, juicy dark cherries. 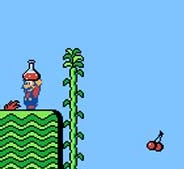 Mario is obviously a fan.