If you’re in London, treat yourself. It’s not that expensive and you’re guaranteed a good quality cocktail in an excellent setting. 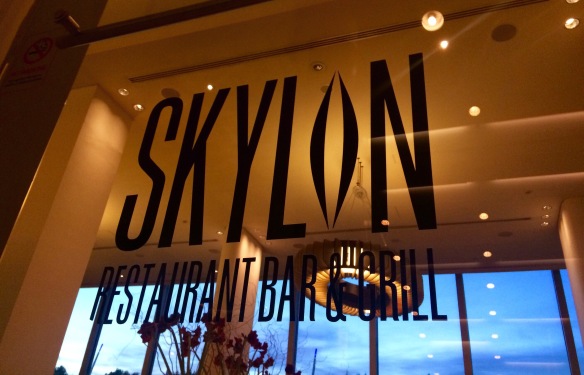 This is a lovely bar in a wonderful, all-welcoming part of London. The brutalist Southbank Centre with its grand but minimalist polished concrete slabs enjoys a wonderfully soft form of acoustics. The diverse array of visitors range from pondering thespians to the philosophical homeless, their intriguing conversations all muffled into soporific unintelligible whispering by the imposing edifice of the building itself. It’s an ocean of calm just a few steps from the virulent masses thronging the banks of the River Thames. Wander around the building and you might stumble across a cultural performance by Zulu warriors or perhaps a fierce debate on the topic of lesbian poetry from the 1980s. Whatever you find, you will likely leave feeling a strange, deep connection with your fellow humans.

Anyway, one of the things situated in this strange, post-war monument to what communist Britain might have aspired to be, is a peculiarly yet perfectly juxtaposed bar and restaurant, very firmly on the free-market capitalist side of the fence. 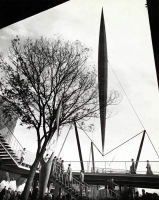 The Skylon itself, after which this bar/restaurant was named, was a stylised metal structure erected during the Festival of Britain, a nationwide event held in 1951 commemorating science, art and architecture in an attempt to lift the national mood in the gloomy post-war years. With a very unstable economy, the loss of vast swathes of the British Empire and extensive, enduring human and infrastructural damage suffered during the war times were still very tough in the country.

As illustrated in John Ritchie Addison’s photograph above, the Skylon piece cut quite a striking image over the southern banks of the Thames. It was one of many features of art and design erected for the festival but its image remains one of the most enduring.

Nonetheless, it was seen as too costly for the government to bear. The re-elected prime minister Winston Churchill, who knew a thing or two about martinis, also reportedly hated it as a socialist symbol erected by the Labour government which had defeated him in the post-war election.

So naturally he had it torn down and sold for scrap. 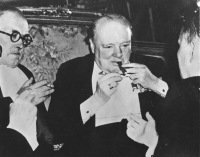 However, while he may have hated the Skylon sculpture, I hope he would approve of the martini served in the nearby restaurant which has taken its name.

Apart from sometimes getting busy (for evident reasons) the only other downside of the bar was the fact that their diverse and highly creative cocktail menu didn’t actually have a classic martini option on it. I would recommend they include one in future as the one they actually served me was almost perfect. 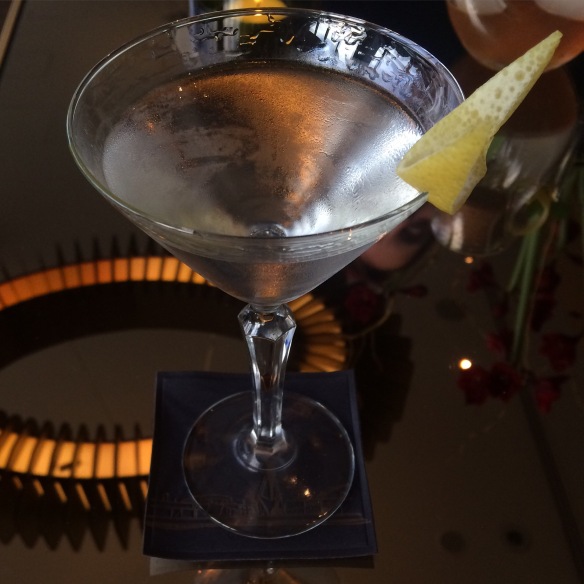 I apologised for asking the waitress for an item not on the menu but she asked her manageress and returned to ask whether I would prefer mine made with gin or vodka, and if I would prefer it classical or dirty.

Excellent, I though, and ordered a classic martini (with gin, obviously).

It arrived in a small, but perfectly formed and indeed very elegant martini glass. Lemon peel had been squeezed into the glass and the lemon garnish was artistically cut and fastened onto the rim. I don’t think either the glass or the gin had been kept in the freezer but effort had clearly been put in to chilling both before serving. 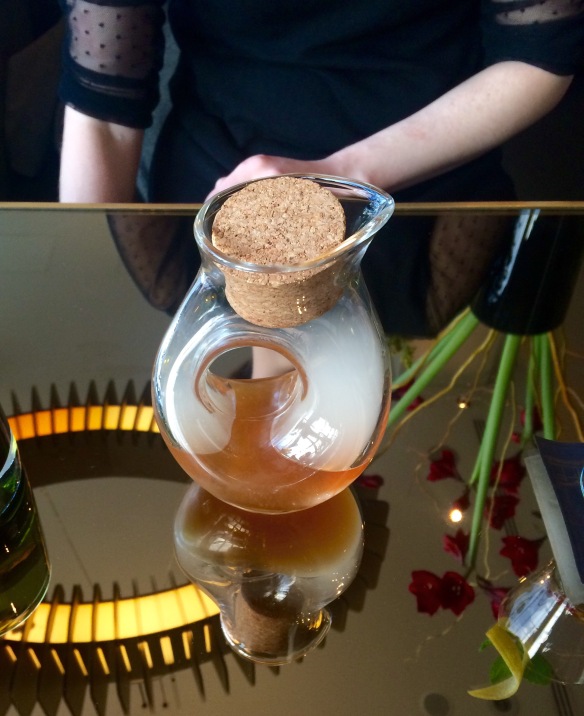 I also took a moment to admire my friend’s choice of cocktail – the Jamaican Fury. Beautiful and creative, the smoke swirling in the bottle smelt simply of cigarettes, but when decanted into a glass it added a rich, savoury aroma to the otherwise sweet and powerful cocktail. 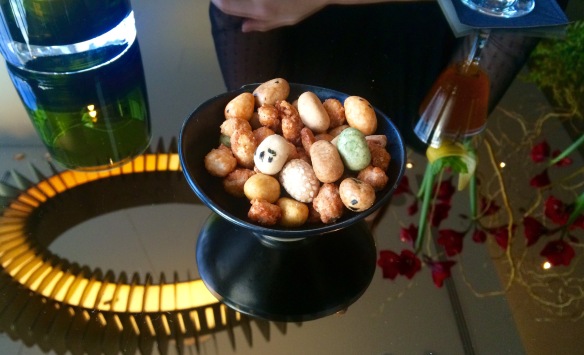 Moments later we were served a bowl of Japanese rice snacks for free. This may sound very simple, possibly even gimmicky, but it’s a vanishingly rare phenomenon in British drinking establishments and adds so much to the martini drinking experience.

Skylon gets 4.5 out of 5 for its martini. It was cold, lemony, in a martini glass, served with nibbles, with an additional selection of good food available on the menu, while the service was friendly and attentive and the setting was relaxed, ambient and stylish (and in one of my favourite buildings in London). For £12.50 I also thought the drink was very good value for money, certainly by London standards and in such a central, prominent venue. I would recommend booking in advance though as it will get crowded. 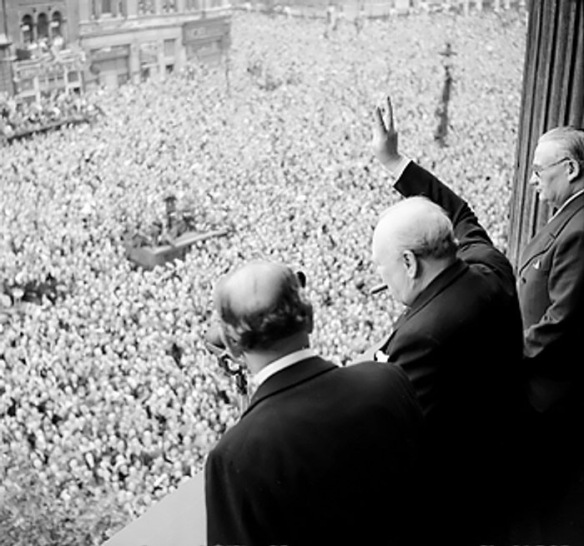 Otherwise, a victorious crowd pleaser. Well done Skylon, long may you reign over the banks of the Thames – but please put the classic martini back on your menu for good.

“Which martini would you drink in the event of a zombie apocalypse?”

Bear with me as I explain the link… 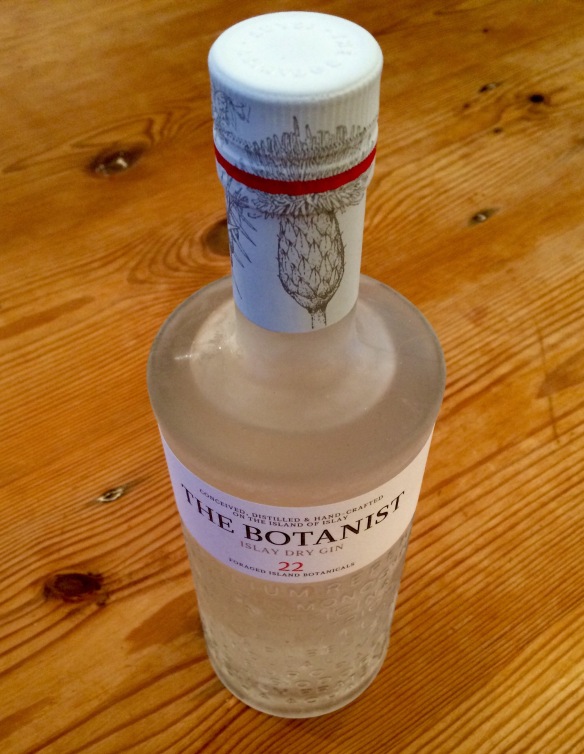 I have mentioned before that I come from the Hebrides. I was therefore very keen to taste this gin, crafted on the island of Islay.

In the event of some kind of apocalypse or worldwide catastrophe (zombies etc), I always thought that my natural instinct would be to scramble back home to the islands to try and survive.

In the event that we managed to cling on to our existence in this beautiful island chain on the fringe of European civilisation I imagine that once the banalities of food production, healthcare and general society had been arranged our community would very quickly address the problem of what we would drink at the end of the day (it’s a cultural thing).  With a global collapse of logistics we would no longer be able to import drinks and ingredients from afar and would subsequently have to craft our own alcohol locally.

The most obvious drink for us to concoct in this part of the world would be whisky, but for die-hard gin lovers perhaps we would attempt to distil a clear spirit and flavour it with local botanicals – including juniper.

That is exactly what the craftsmen at the Bruichladdich whisky distillery have done with the Botanist gin.

It is flavoured with 31 botanicals, 22 of which are hand-picked locally, and slow-distilled to create a distinctive flavour. 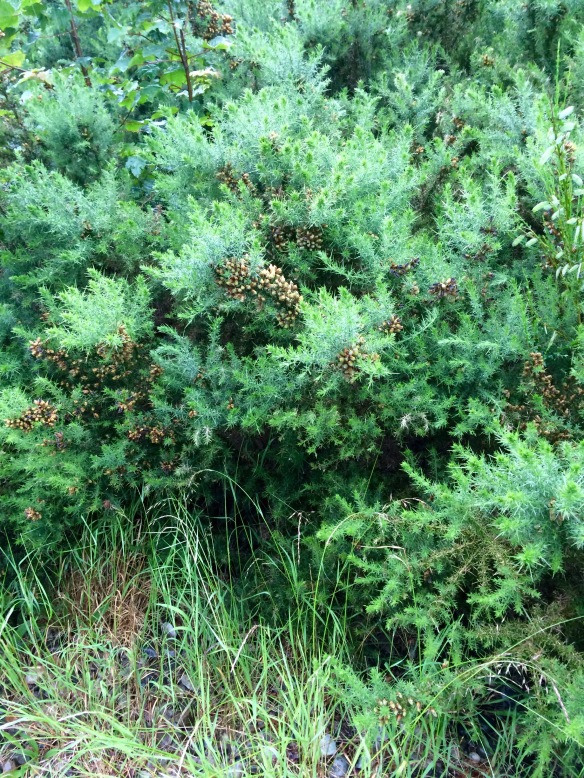 My personal favourite addition is gorse-bush flowers, very evocative of a  childhood spent in the outdoors up here.

Turn your volume up and you can hear the gorse bush seed pods popping in the August sun. #Argyll #summer #Scotland #isleofmull #gorse #botanist #botany

In this clip you can hear the gorse bush seed pods popping in the (rare) August sun.

Other favoured botanical additions include thyme, birch and bog myrtle, while one of the junipers used in the production is also grown on the island.

The gin is distilled in a ‘Lomond still’ – a rare item traditionally used to make whisky. 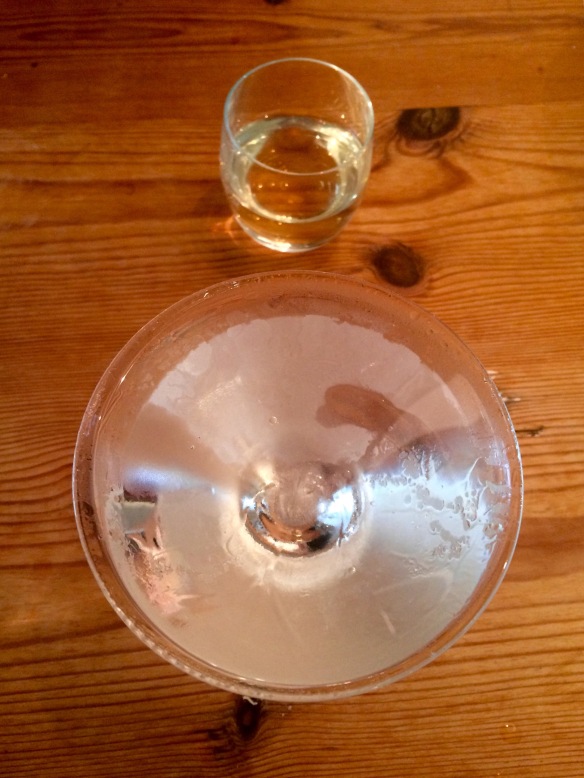 Perhaps it is for this reason that I found the gin to be somewhat fiery in flavour. My favourite whisky is the smokey Laphroaig, also from Islay. Maybe it’s the local water that does it…

(Note that the above whisky is a Glen Moray – a Speyside malt). 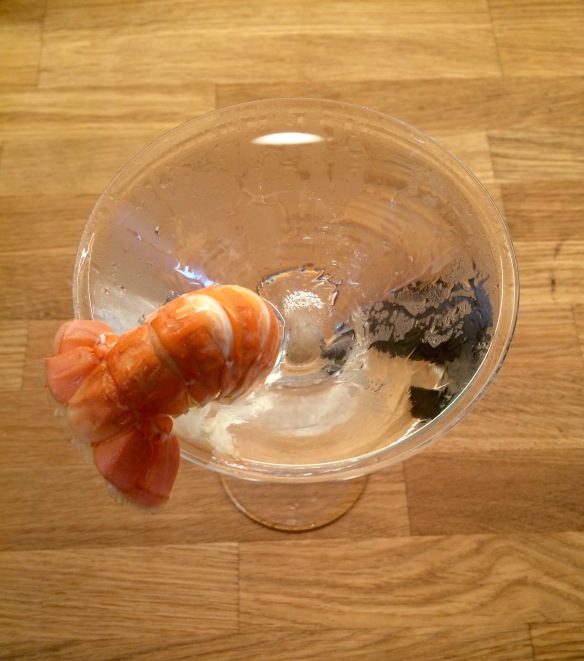 Naturally, the post-apocalyptic Hebridean diet would include a significant proportion of seafood (unless the apocalypse included some sort of radioactive fallout). As such I wanted to pair this gin with some locally-sourced fruit du mer. Luckily when I made this martini we had langoustines to hand at home (as you do) but there are loads of other potential seafood variations. Please see  the Langoustini and Loch Ness Monstini for further martini inspiration.

The gin also goes well in a gin and tonic. For further guidance please see here. 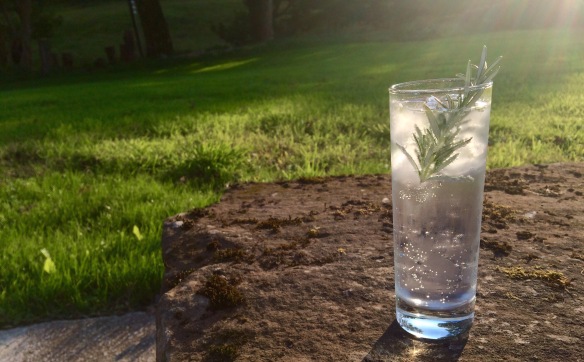 Perhaps you could serve the G&T with some herbs sourced locally from the Hebridean garden, such as in this case, with some Rosemary from out the back door. 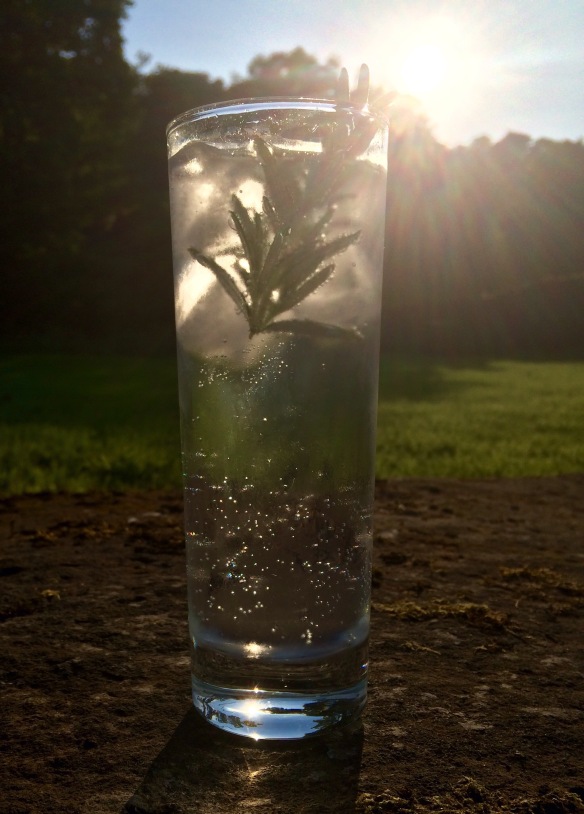 In a land where summer only seems to last a day you certainly want to make sure that your choice of refreshment is a good one.