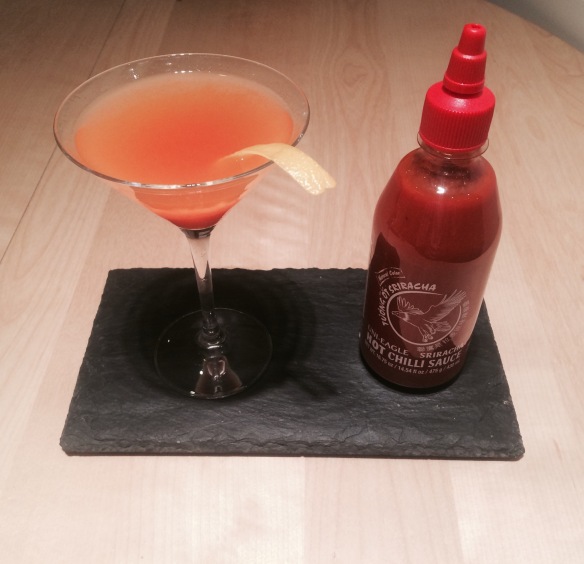 What do Thais and Texans have in common? A penchant for spicy food.

I have a good friend, currently in Texas, who recently announced his addiction to Sriracha hot chilli sauce, a fiery concoction from Thailand.

A US national and an Arabist, he has a very interesting career and academic background, with some very intriguing (and often hilarious) tales from London and the Middle East. Martinis are the best accompaniment to international storytelling so he is therefore a perfect martini guest. 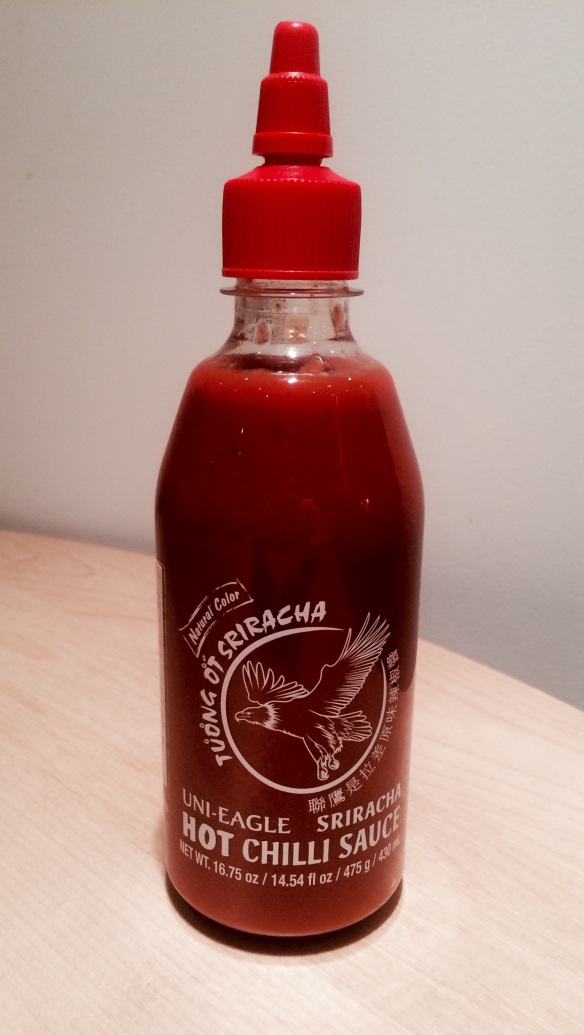 I remarked that I should try and make a martini out of the sauce for him. I have already talked about my love of Sri Lanka so it should come as no surprise that I love spicy food, while I have previously made spicy martinis here, here and here. However, I think my friend was appalled at the suggestion of a Sriracha martini. And perhaps rightly so: you shouldn’t mess with a classic, let alone two.

Nonetheless, I persevered, and I was pretty happy the first time round. 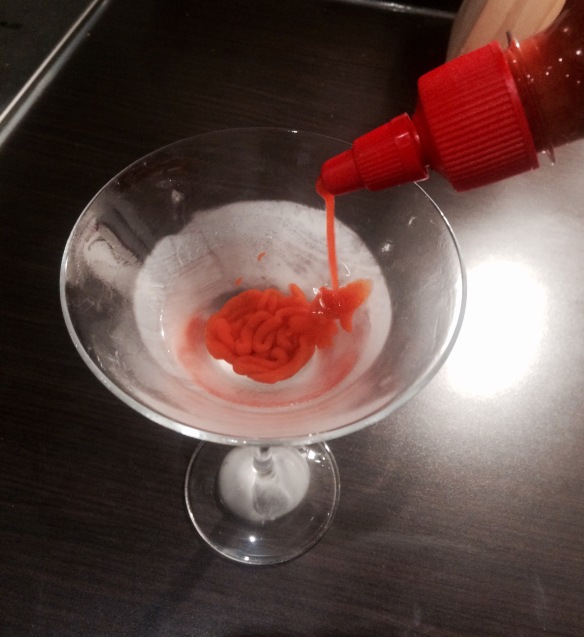 – Take a strip of lemon peel and squeeze the oil out of it into a chilled martini glass.
– Add a measure of sweet vermouth
– Add a dash of Sriracha hot sauce (or to taste – it’s spicy!)
– mix the two together, then top up with chilled gin or vodka
– stir the drink with the lemon peel and add it as a garnish (you might want to shape it with a knife so it looks neater). 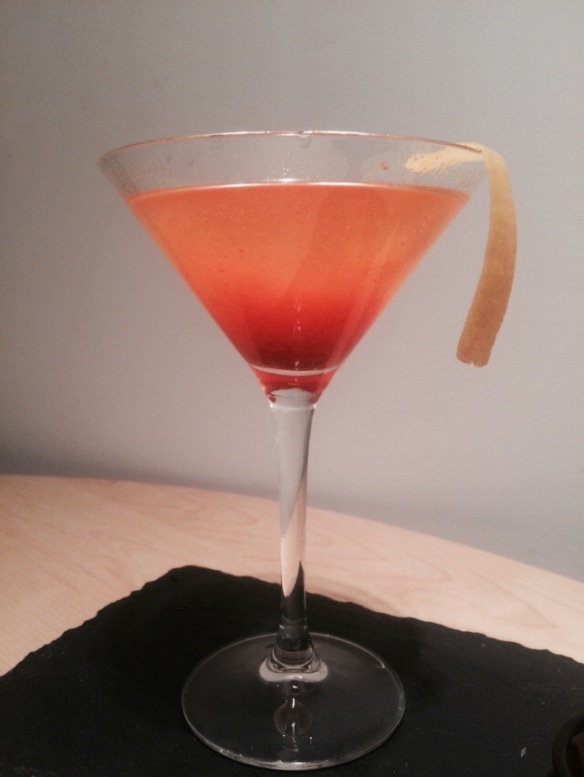 It’s very spicy, with a hint of lemon, and is good for whetting the appetite. 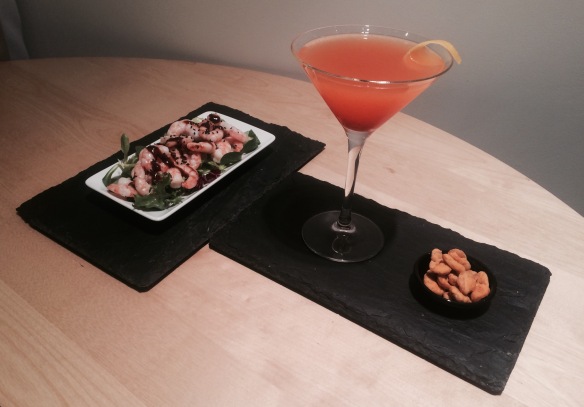 As far as accompaniments are concerned this martini goes very well with seafood. I would recommend chilled oysters, prawns or salmon as an accompaniment, possibly even with avocado. I think the cool, oily/fatty fish compliments the fiery drink. Here I served chilled king prawns on a bed of lettuce with Peking duck sauce with sesame seeds. I’m sure there are more sophisticated accompaniments than something I poured out from a jar but I just got home from work and wasn’t intent on doing anything more fancy. I also served some spicy broad beans as well. 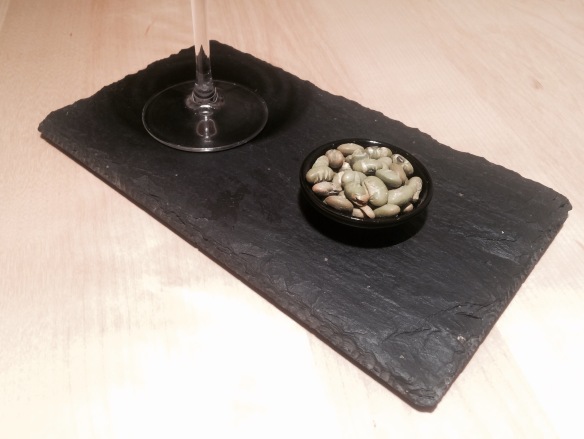 Another new snack I recently found in an Asian supermarket was roasted salted soy beans which was a nice, non-spicy accompaniment for the martini.

This drink would also be a good aperitif before some Thai food. 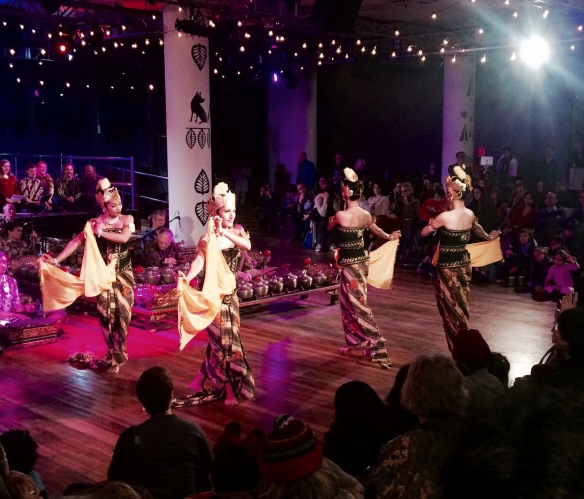 You might even want to drink it while watching a live Thai dancing performance.

In fact, if you drink a few of them you could probably join in.