Several months ago, my auntie suggested that we hold a popup martini bar in our family restaurant. The venue is the Gallery, on the Main Street of Tobermory on the Isle of Mull (a beautiful and friendly Hebridean Island in Argyll, western Scotland).

We thought about the idea for a while but it remained firmly in the land of fantasy for quite some time. Then, last month, my Mum decided that we should just go ahead and do it. If it doesn’t work, we will learn some lessons, and if it does work, well, it will be a fantasy fulfilled – for me at least, and we might be able to organise some more.

Given that martinis aren’t exactly common tipples at the drinking establishments on the island, we thought it would be fun to do something new and different, particularly for the locals, although it was peak tourist season so we thought there would be several visitors around as well. Ultimately though, I think I just wanted to try my hand at finally being a martini barman.

So, we bought plenty of martini glasses, a shed load of gin, commandeered a freezer to get it all in, planned the processes and the structure of the evening, and put out some adverts and social media posts about it. With some extremely useful guidance from the restaurant staff and the creative talents of my mother, we came up with a plan, who would serve what, which food items we would include on the menu, the types of martini we would serve and even a playlist.

The Gallery is very conducive to a martini atmosphere. The building is a beautiful old church, the tallest structure on the island, lovingly restored (a work still in progress) by members of the family (such as my gravity-defying brother in the above image) and some skilled friends on the island.

It has great acoustics and a good sound system. In addition, because it is already a restaurant we have an alcohol license in place, tables, chairs, equipment and staff members, which made it a lot easier for us to prepare.

On the day of the event, we were exceptionally lucky with the weather. The sun was out and it was positively hot.

Given that our restaurant has an outdoor courtyard, sociably adjacent to Tobermory Main Street (it’s good for people watching and catching up with passers-by) it’s the perfect setting for sitting out and enjoying a coffee or drink whilst overlooking the harbour.

Word of advice: if you’re going to do this sort of thing, try to practise the entire process in advance. That includes testing all your equipment! I stupidly didn’t check our sound system entirely and at the last minute discovered that my phone (with my pre-made playlist) wasn’t compatible with the sound system. Thank god for local saint Wiksey who turned up and fixed it all in the space of about 5 minutes. Thank you, you technical genius!

Otherwise the freezers were good and the gin and glasses were suitably chilled. I also took my own special martini knife, peeler and chopping board. I’m really fussy about my martini kit which can come across as *slightly* obsessive but if something is out of place it will annoy me no-end and distract me from my goal of getting everyone tipsy.

We were almost ready.

It didn’t help that while I was walking along the Main Street in the afternoon, nearly everyone I spoke to mentioned the event. I was starting to worry that we would be overwhelmed.

I put together a menu, outlining the martinis we would offer:

We also served a selection of additional drinks like beer, wine, pimms and prosecco. 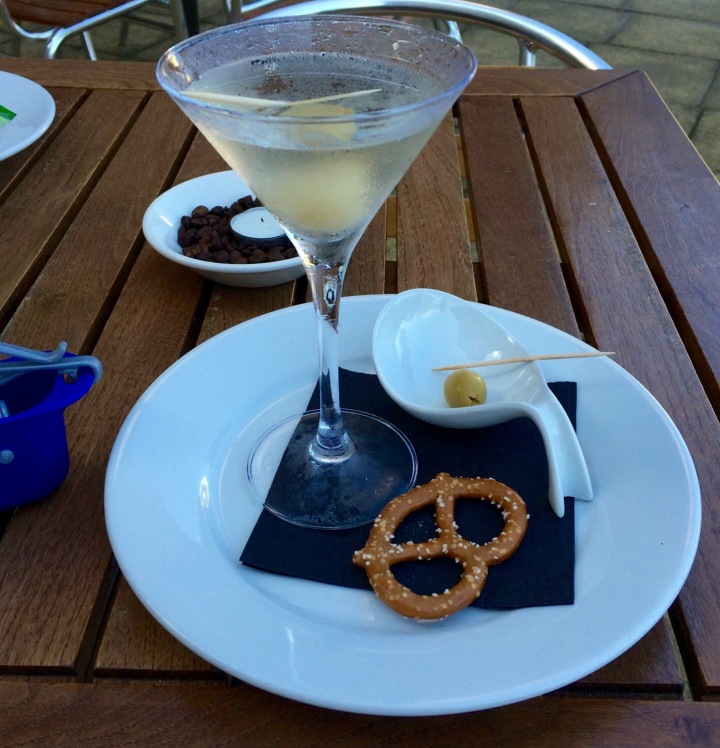 Mum and I went over the best layout for the drinks. We would serve the martinis at the bar on a plate with a small dish of olives and some miniature pretzels on the side. Additional food was also available on the menu.

The lovely Turnbull family supplied us with some fat, juicy oysters (my favourite food and an amazing martini accompaniment) while the beautiful Sally Swinbanks of the Tobermory Fish Company supplied us with additional seafood bites which again go fantastically with a martini. 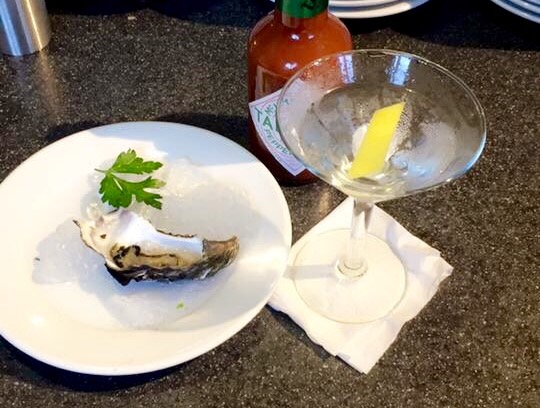 Minutes to go, the music was playing and we stood in expectation. I was very tempted to pour then down a martini to relax but I resisted and my colleague Catriona kindly made me an espresso instead which worked. Then, the doors opened at 5 o’clock and we were ready to go.

My first order came in almost immediately for four martinis and I got to work, assembling them as fast as I could. No sooner had I served them had two more orders come in. I continued at the same pace. I didn’t stop or slow down again until 8 o’clock when we closed. At one or two points a queue had formed. What a rush. I was worried that we might end up making over 100 martinis, and would then run out of things. In the end we only ran out of the miniature pretzels and I served 250 martinis. A personal record! I was over the moon. I was also absolutely thrilled with my colleagues who seemed to effortlessly keep a lid on the proceedings, serving, cleaning and arranging everything with good humour.

Unfortunately because I was so busy I had barely lifted my gaze up from the bar for the whole time so I hadn’t had a chance to see how everything was progressing, but I was told that people were having a good time. Some of the guests kindly shared their photographs with me and allowed me to use them on the blog. 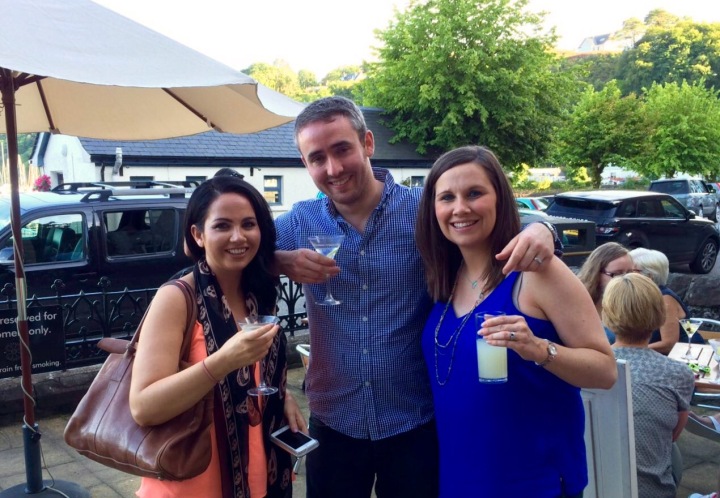 As it went so well I look forward to doing it again in the future. I would also be interested to see how it works out if the weather isn’t as good. If everyone is inside the view wouldn’t be as romantic but the atmosphere could be brilliant.

At some point in the future I would like to co-operate with my talented cousin Cat Loud and do a joint martini-cabaret evening. You can see her perform this month at the Edinburgh Fringe.

I also want to hold a martini night on a Friday so that more people are able to join us (our first one was on a Tuesday). I’d also like to do it in the winter when locals have more time on their hands for a good party.

Watch this space and thank you everyone who helped and those who came on the night! 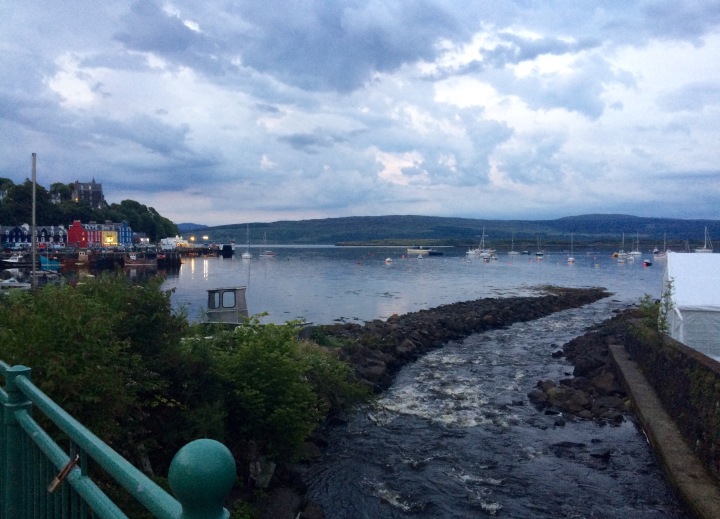 One thought on “The Popup Martini Bar”

Look at this beautiful Tobermory matchbox! Part of a homesickness care package. Thank you so much @ninatansstudio
I finally got round to revamping my website during my recent time off. I hope you like it!
Lapsang Souchong has been called 'the whisky of teas' and I like both of those things, so I infused some lapsang Souchong in some gin and made a martini out of it. On this very beautiful summer's day, it has been a treat.
Here's a quick 'n' dirty tip to chill a bottle more quickly. Dampen two sheets of kitchen paper, roll up the bottle and place it in the freezer. Someone with a better grasp of physics can probably explain the "how" but I can explain the "why" - no-one likes a warm gin!
The Hebrides are on their Studio Ghibli game again. The visibility is so good today you can see loads of the Outer Isles.
A lemon drop martini for a special lady.
More Gibson appreciation.
A Filthy Martini...
Friday plans on the Isle of Mull: iconic drink, iconic view and iconic martini music from Les Baxter.
Follow The Martini Socialist on WordPress.com